Reached by four major ocean currents, including upwellings of deep water rich in nutrients, the Galápagos Islands off the coast of South America are a hotspot of biodiversity. Coexisting at this junction are tropical and temperate species and species typically found farther south. Many are found nowhere else on Earth, and their unique characteristics famously inspired Charles Darwin’s theory of evolution by natural selection.

The islands are among the most singular and irreplaceable areas in the world, harboring over 2,900 known species of fish, invertebrates, and marine mammals, in addition to endemic seabirds, the world’s only marine iguana, and the world’s highest abundance of sharks. Of these marine animals, 57 are included on the IUCN Red List of Threatened Species.

Despite the Galápagos Islands’ unparalleled value to our natural heritage, little scientific information existed on their marine ecosystems beyond the narrow, shallow strip of ocean surrounding the archipelago. And, until recently, less that 1 percent of the islands’ waters was fully protected from fishing.

To understand the broader marine ecosystem of the Galápagos, the Pristine Seas team carried out an expedition to the archipelago in collaboration with the Galápagos National Park and the Charles Darwin Research Station. They used high-tech methods—including rebreathers, a manned submersible, 360-degree imaging, satellite tracking of sharks, and National Geographic drop cameras—to survey and document its deep and offshore environments.

The Government of Ecuador designated the Galápagos as a National Park in 1959. 97% of the Galapagos Islands’ land is a National Park; the other 3% is inhabited. The land is very well regulated, with development totally prohibited within the Park, and tourist access strictly regulated and limited to a few small areas. In 1979, it was further declared a UNESCO World Heritage Site. In 1998, the foundation of the Galápagos Marine Reserve declared a protective boundary around the archipelago, which encompasses the waters to 40 nautical miles beyond the base line around the islands (138,000 square km). The reserve prohibited industrial fishing (e.g., purse seining and long-lining) but allowed “artisanal” fishing. When the reserve was created, a belt 2 nautical miles-wide from the islands was zoned in conservation areas, tourists areas, and fishing areas. At the time of the Pristine Seas expedition to the islands, less than 1% of the reserve was fully protected in no-take areas.
In December 2015, the Pristine Seas team undertook an expedition to the Galápagos in collaboration with the Galápagos National Park and the Charles Darwin Research Station. The team used scuba and rebreather diving, a manned submersible, 360-degree imaging, satellite tracking of sharks, and National Geographic drop cameras to survey and document the waters around the islands—with particular emphasis on deep and offshore environments.

Our analysis showed that shark biomass at Darwin and Wolf is the highest in the world. Sharks are more valuable in the Galápagos than anywhere else on Earth—the average lifetime spending generated by a shark in the Galápagos is $5.4 million. Canal Bolivar in the western portion of the archipelago is a unique mix of warm and cold water species with tropical species sharing the water with penguins and sea lions. Flightless cormorants and marine iguanas, unique to the Galapagos, are most abundant in this region.

We explored the deep sea down to 450 m in a 3-person submersible and discovered lush cold water coral gardens with several unsubscribed species, including a new species of cat shark and several scorpionfish. One significant finding was a large concentrations of olive grouper off Wolf Island. This may be the first documented spawning aggregation for this species in the GMR Due to the strong el Niño, no whale sharks were observed and hammerheads were fewer in number and deeper than previously noted. Deepwater kelp forests, present several years ago, were absent during our expedition, likely as a result of the warm water associated with el Niño.

Several fishing boats were observed around Darwin and Wolf during our expedition, and our recent work shows that the endemic Galapagos grouper has been reduced by 90% over the past few decades. 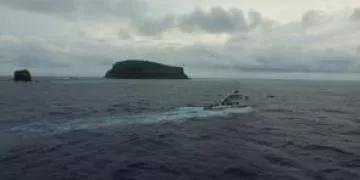