After having encountered the cœlacanth during his first Gombessa expedition, diver, photographer and biologist Laurent Ballesta went to Fakarava in French Polynesia for a new scientific expedition intended to study the spawning aggregation of camouflage groupers and its interaction with a huge aggregation of 700 gray reef sharks.
In collaboration with French Polynesia's Centre de Recherche Insulaire et Observatoire de l’Environnement (CRIOBE), this Gombessa II mission presented three major challenges: a 24h dive at 20 meters deep, made possible with a new and original gas mix, spending a complete day underwater with sharks and groupers; a challenge in terms of photography as this rare and extremely fast event requires a shooting of more than 2000 images per second; and finally the scientific challenge of studying the mechanisms governing this vital phenomenon and its key role on the lagoon's ecosystem.
It offered three major challenges:

Because of its intensity and uniqueness, the grouper aggregation phenomenon has been studied for the last two years by the CRIOBE, the Center for Insular Research and Polynesian Observatory of the Environment, linked to the CNRS, the French National Center for Scientific Research. Their scientific observations still await answers.

Herefore, a complete physical and biological monitoring of the South pass of Fakarava was set up for the first time: seabed mapping, sonar tracking, acoustic analysis, study of ocean currents, aerial photography, 24/7 fixed surveillance cameras. Some of the best underwater cameramen in the world have been hired to complete this exceptional assignment.

A 90 minute documentary film is being made to be broadcast on the European cultural channel ARTE in 2015. An English 52 minutes version will be distributed internationally afterwards.

Based on shark nutritional demand, the entire shark aggregation would require about 350 kg of fish per day

3 VR2W acoustic receivers were deployed (1 on the grouper aggregation, 1 in the pass and 1 in the lagoon) 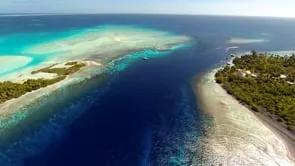